Announced in 2018, MapKit JS takes the convenient cartographic capabilities of the MapKit framework on iOS and macOS, and brings them to the web.

MapKit JS — along with MusicKit JS — usher in a new generation of web APIs from Apple, that’s defined by a brand new authentication flow based on JSON Web Tokens (JWT). These APIs also come at a time when Swift on the Server is just starting to hit its stride, making the browser-based offering all the more exciting.

This week on NSHipster, we’ll zoom out and give turn-by-turn directions of how to start your journey with MapKit JS. (Once we figure out where we lost our keys) on our way to a working integration.

When investigating any new language or framework, it’s always helpful to see a full, working example. So in preparation for this article, we built this example app, which uses MapKit JS to show which bikes are available to rent through BIKETOWN, Portland’s bike share service.

To use MapKit JS on the web, you’ll need an Apple Developer account. Using that account, you may obtain credentials for issuing tokens that can be used to request map tiles, directions, and other mapping APIs.

You create and manage MapKit JS keys from your Apple Developer Account Dashboard. (The process should be familiar to anyone who’s set up push notifications for their iOS app before.)

As you’re passing through the Apple Developer Portal, take note of your Team ID, which can be found in your Membership Details page. We’ll need this later on in the article…

On the “Certificates, Identifiers & Profiles” page, navigate to the Maps IDs section, which is listed in the sidebar under the “Identifiers” heading. Click the + button and fill out the form, providing a Maps ID description and a unique, reverse-domain identifier (such as maps.com.nshipster). 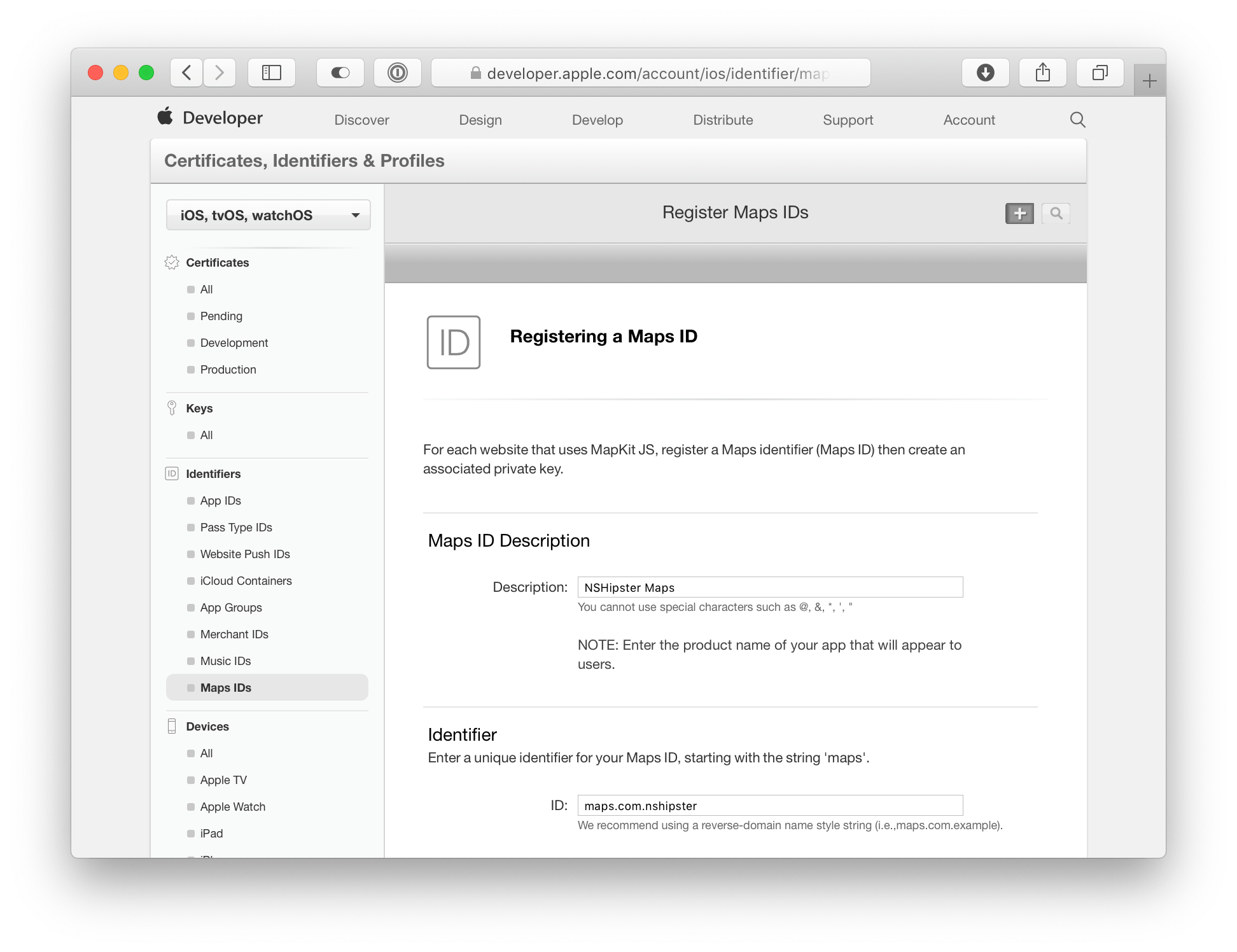 Next, go to the all keys page found in the sidebar under the “Keys” heading. Again, click the + button and proceed to fill out the form, selecting the checkbox that enable MapKit JS key services and configuring it to use the Maps ID created in the previous step. 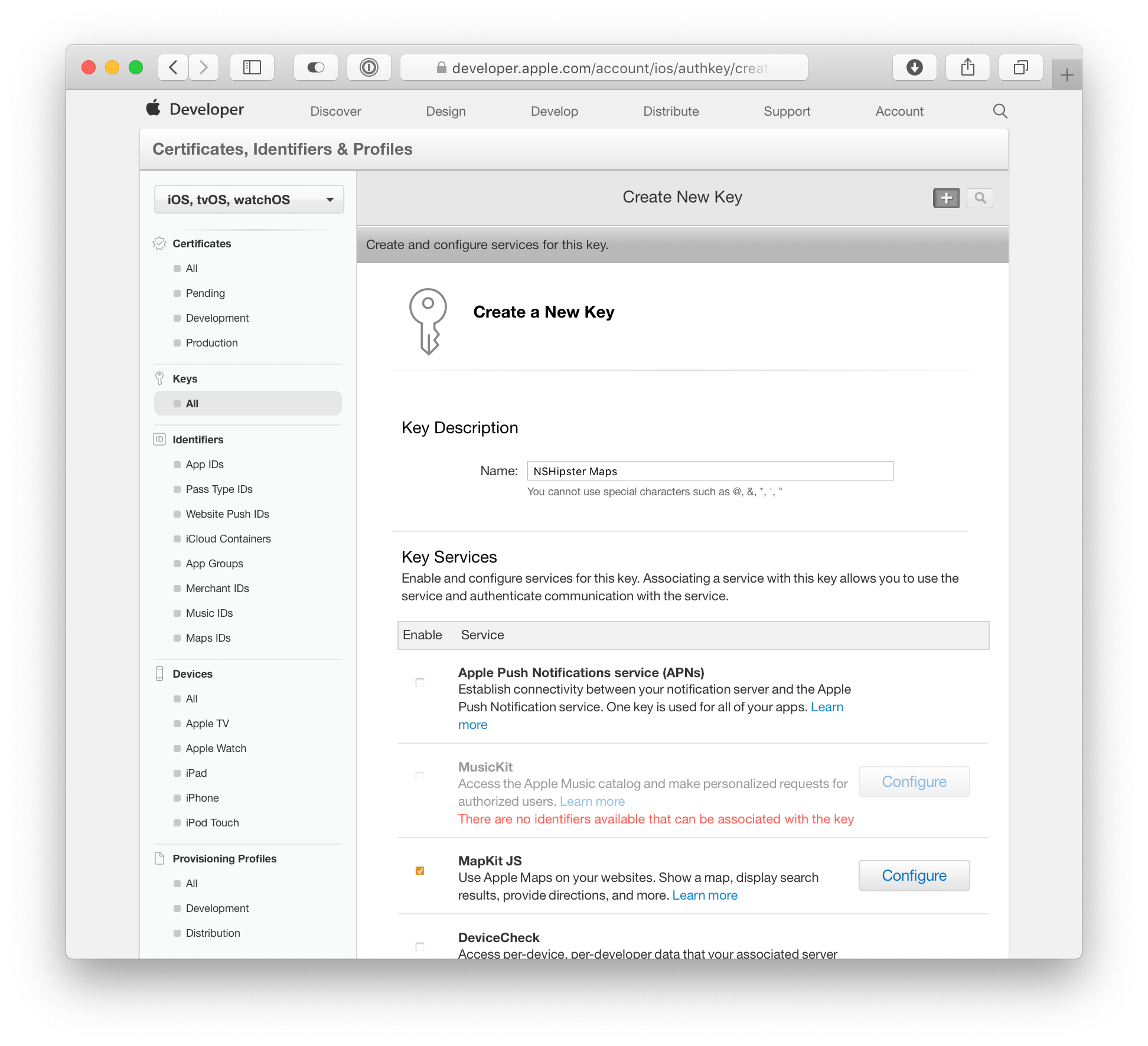 For more information about setting up MapKit JS, see this article from Apple’s official documentation.

At this point, you should now have a file named something like AuthKey_Key ID.p8 sitting in your Downloads folder.

.p8 is a made-up file extension; the AuthKey_Key ID.p8 file you downloaded is a text file like any other. If you open it up, you can see that it is, indeed, text:

Although entirely made-up, the .p8 extension isn’t entirely meaningless: it signifies that the file is a private key created according to Public-Key Cryptography Standards (PKCS) #8 which is defined by RFC 5208.

The convention of delimiting text-encoded binary data with -----BEGIN THING----- and -----END THING----- is known as PEM format, which is named after Privacy-Enhanced Mail. The text sandwiched between those delimiters is the Base64-encoding of the private key, represented in ASN.1.

At this point, you may feel like you took a wrong turn and drove right into an ocean of acronyms. This wouldn’t be surprising, as drowning in alphabet soup is an occupational hazard of the software development profession — especially when it comes to matters cryptographic.

But worry not! You can make it back to shore just by treading water. All you need to know at this point is that you’ll use the private key in the .p8 file to let Apple know that our requests for map data are coming from us.

JSON Web Tokens (JWT) are a way for claims to be securely communicated between two parties They’re an open standard, codified by RFC 7519.

A JSON Web Token has three distinct parts consisting of Base64-encoded segments joined by a period (.).

JSON web tokens can be daunting when seen up close, but the structure makes more sense when you see it visually:

The JWT website offers a wealth of information about the standard itself, as well as a visual token debugger and a list of implementations in various languages.

Apple Maps JS requires claims for the issuer (iss), the date of issuing (iat), and the expiration date (exp); you may optionally specify an origin to restrict which hosts are allowed to make requests. To verify that claims are made by who they claim to be, tokens are signed and encrypted using the ES256 algorithm.

To sign a JWT token for MapKit JS, we’ll need the following 3 pieces of information:

At the time of writing, the Vapor project’s JWT package doesn’t implement the EC256 algorithm that’s needed to sign JWT tokens for MapKit JS. Our example project uses the Kitura project’s SwiftJWT package, which does satisfy these requirements.

Although you could generate a single API key that doesn’t expire, that opens your account to abuse from those who might take advantage of these generous terms. Here, a “principle of least privilege” is generally preferred; instead of issuing one immortal token, issue tokens that expire after a short period of time, and require clients to request new ones as necessary.

Of course, in order for this to work, we need to keep the private key secret from the client. To do that, we’ll store it on a server and mediate access by way of responses to token requests.

Serving Tokens with a Web Application

Here’s a simple web application using the Vapor framework. When a GET request is made to the host root (/), a static HTML page is served that displays a map. The code that generates the map, in turn, sends a GET request to the /token endpoint to get a JWT in plaintext that it can use to initialize MapKit JS.

Below, the implementation of the generateSignedJWTToken() function is essentially what we had in the previous code listing.

In the case of the private key, you can remove the newlines and keep only the encoded text, and export that to the MAPKIT_KEY environment variable, as we did in the example app for this article.

Finally, let’s complete le grand tour with a peek at what’s going on in our client-side JavaScript file:

Before we can request map tiles, we need to have Apple’s servers give us the OK. We do this by calling the init method, which takes an authorizationCallback; the function takes a single closure parameter, which is called asynchronously when the token is received by the fetch request.

Alternatively, if what you’re making is unlikely to leak outside of your localhost, you could certainly take a short cut and hard-code a long-lived token. Instead of waiting for a fetch to finish, you simply call the done function straight away:

Now that we’ve gone through all of that trouble to get map tiles hooked up for our website, let’s do a quick drive-by of the actual MapKit API:

MapKit JS should be familiar to anyone familiar with the original MapKit framework on iOS and macOS. For example, when you initialize a map, you can configure its initial view by constructing a region from a fixed distance around center point.

Annotations work much the same, except with arguably nicer affordances out of the box. For example, mapkit.MarkerAnnotation offers the same, familiar pushpin shape that we iOS developers have always wanted — with simple, power knobs for customization.

With only a few lines of JavaScript and HTML, we can embed a beautiful little map into our webpages using MapKit JS.

Embedding a MapKit JS map on a website with a Content Security Policy (CSP)? Be sure to add https://*.apple-mapkit.com to your script-src, img-src, and connect-src directives.

MapKit JS joins a robust ecosystem of mapping providers. Currently in beta, it offers 250,000 map initializations and 25,000 service requests for free per day (!), which is quite generous — especially when compared to similar offerings from Google and MapBox.

So if you’ve been kicking around an idea for a map widget to add to your site or a directions feature for your web app, you might want to give MapKit JS a look!