iOS development all but requires the use of Xcode. To its credit, Xcode has improved pretty consistently over the last couple of years. Sure, it still has its… quirks, but hey—things could be much, much worse.

Working in an IDE may not be as cool as working in your favorite decades-old editor (or that other one), but you know what is cool? Autocompletion. Not to mention Build & Analyze, Breakpoints, and Instruments.

This is all to say: if we’re resigned to use an IDE in our development workflow, we might as well make the most of it, right? So this week on NSHipster, we’re going to talk about one of the more powerful yet underused features of Xcode: Code Snippets.

From @interface declarations to if (!self) return nil; incantations, there is a lot of avoidable typing in Objective-C. Xcode snippets allow these common patterns and boilerplate code to be extracted for quick reuse.

Click the { } icon to show the Code Snippets Library.

There are two ways to insert a snippet into your code:

You can drag and drop from the code snippets library into your editor:

…or for snippets that include a text completion shortcut, you can start typing that:

To get a sense of what you can do with snippets, here’s an overview of the ones built-in to Xcode:

Of course, what really makes snippets such a powerful feature is the ability to create your own.

The process of creating a snippet is actually pretty unintuitive and difficult to explain. It uses an obscure OS X system feature that allows users to create a “Text Clipping” by dragging and dropping selected text. Much easier to just show it in action:

After being added to the code snippet library, a user-defined snippet can be edited by double-clicking its listing: 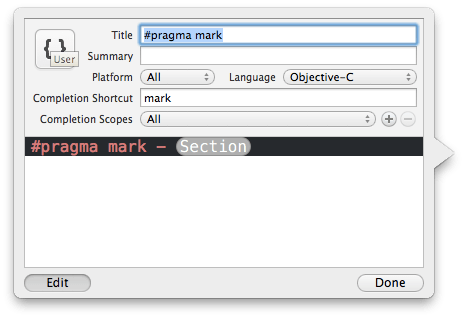 Each snippet has the following fields:

Something you may have noticed in using other Xcode snippets are placeholder tokens:

In Xcode, placeholder tokens are delimited by <# and #>, with the placeholder text in the middle. Go ahead—try typing that into Xcode, and watch as the text between the octothorp tags magically transforms right in front of your eyes.

Include placeholder tags to add a dash of dynamism in your own snippets!

A list of generally useful code snippets can be found in this GitHub project (pull requests welcome!). If nothing else, this also serves as an example of what’s possible.

Programming isn’t about being an expert typist, so don’t make it any more difficult for yourself than it needs to be. If you find yourself groaning while typing some inane, rote-memorized code idiom, take a minute to create a snippet for it instead!