“File a radar.” It’s a familiar refrain for those of us developing on Apple platforms.

It’s what you hear when you complain about a wandering UIKit component.
It’s the response you get when you share some hilariously outdated documentation.
It’s that voice inside your head when you reopen Xcode for the twelfth time today.

If you’ve ever been told to “file a Radar” and wondered what that meant, this week’s article has just the fix.

Radar is Apple’s bug tracking software. Any employee working in an engineering capacity interacts with it on a daily basis.

Radar is used to track features and bugs alike, in software, hardware, and everything else: documentation, localization, web properties — heck, even the responses you get from Siri.

When an Apple engineer hears the word “Radar”, one of the first things that come to mind is Anika the Antbear, the iconic purple mascot of Radar.app. But more important than the app or even the database itself, Radar is a workflow that guides problems from report to verification across the entire organization.

When a Radar is created, it’s assigned a unique, permanent ID. Radar IDs are auto-incrementing integers, so you can get a general sense of when a bug was filed from the number alone. (At the time of writing, new Radars have 8-digit IDs starting with 4.)

Radar.app uses the rdar:// custom URL scheme. If an Apple employee clicks a rdar://xxxxxxxx link with an ID, it’ll open directly to that Radar. Otherwise, clicking this link pops up a dialog box with the message “There is no application set to open the URL rdar://xxxxxxxx.”

Unfortunately for all of us not working at Apple, we can’t access Radar directly. Instead, we have to file bugs through systems that interface with it indirectly.

Apple Bug Reporter is the primary interface to Radar for external developers.

Bug Reporter was recently updated to a modern web app that resembles Mail and other apps on iCloud.com. For anyone who remembers its predecessor, I think you’ll agree that this is a huge improvement. 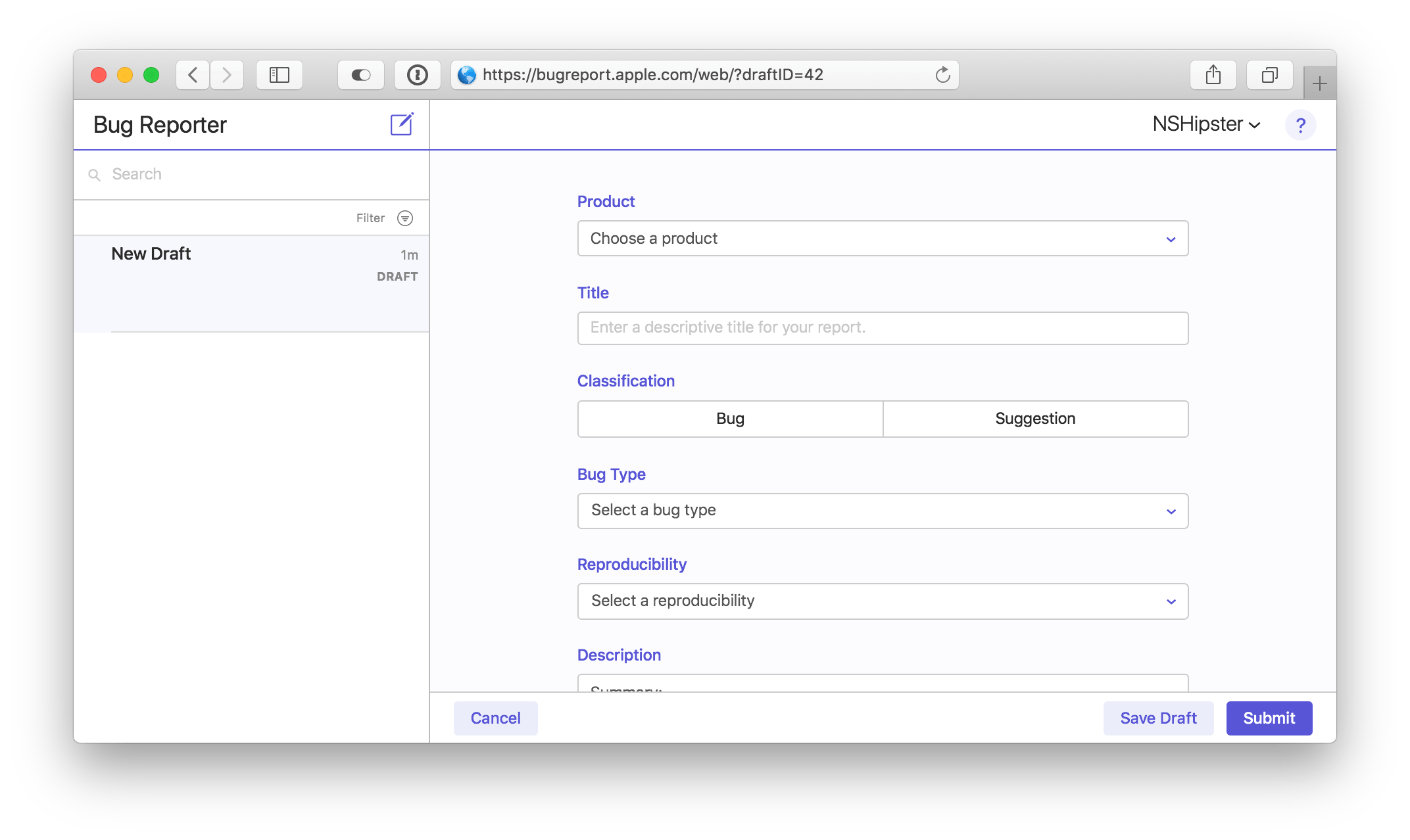 Choose the product related to the problem you’re reporting and enter a descriptive title. If it’s a bug, specify whether the kind of bug (Performance, Crash/Hang/Data Loss, UI/Usability, etc.) and how often you can produce it. Finally, write a description of the problem, including a summary, steps to reproduce, expected vs. actual results, and information about the configuration and version of your system.

This information is compiled into a Radar that is then triaged, assigned, prioritized, and scheduled by engineers.

If you’re participating in the Apple Beta Software Program, and encounter a problem with your prerelease OS, you can alternatively report it using Feedback Assistant (find it on macOS and iOS with Spotlight). 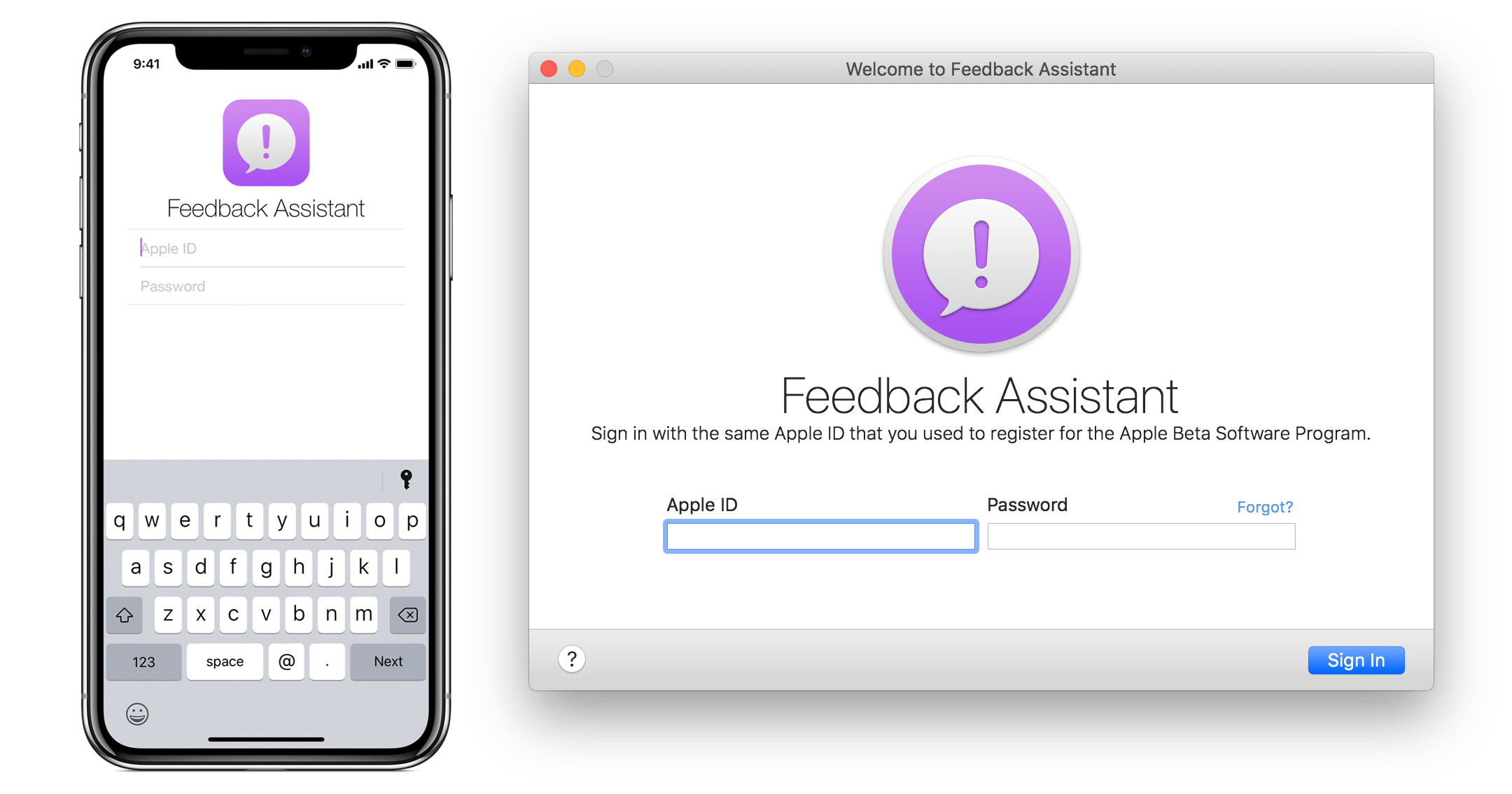 Feedback Assistant offers a more streamlined experience that’s optimized for providing feedback about the platform you’re living on. It automatically captures a sysdiagnose and other information about your system in order to diagnose the problem you’re encountering more accurately.

Whereas Bug Reporter is your first choice for problems directly related to your work, Feedback Assistant is often a more convenient option for any bumps you encounter in your day-to-day.

When developers encounter a problem, they’re motivated to do something about it rather than merely complain. This is the reason they file bug reports in the first place.

This is, incidentally, the same motivation that compels us to create tools to fix problems that we find in the bug reporting process itself.

Here are some essential tools for bug reporting from the Apple developer community:

The fundamental problem with Radar as an external developer is lack of transparency. One of the ways this manifests itself is that there’s no way to know what anyone else has reported. All too often, you’ll invest a good deal of time writing up a detailed summary and creating a reproducible test case only to have the bug unceremoniously closed as a duplicate.

Open Radar, created by Tim Burks, is a public database of bugs reported to Apple. Over the many years of its existence, Open Radar has become the de facto way for us to coordinate our bug reports. 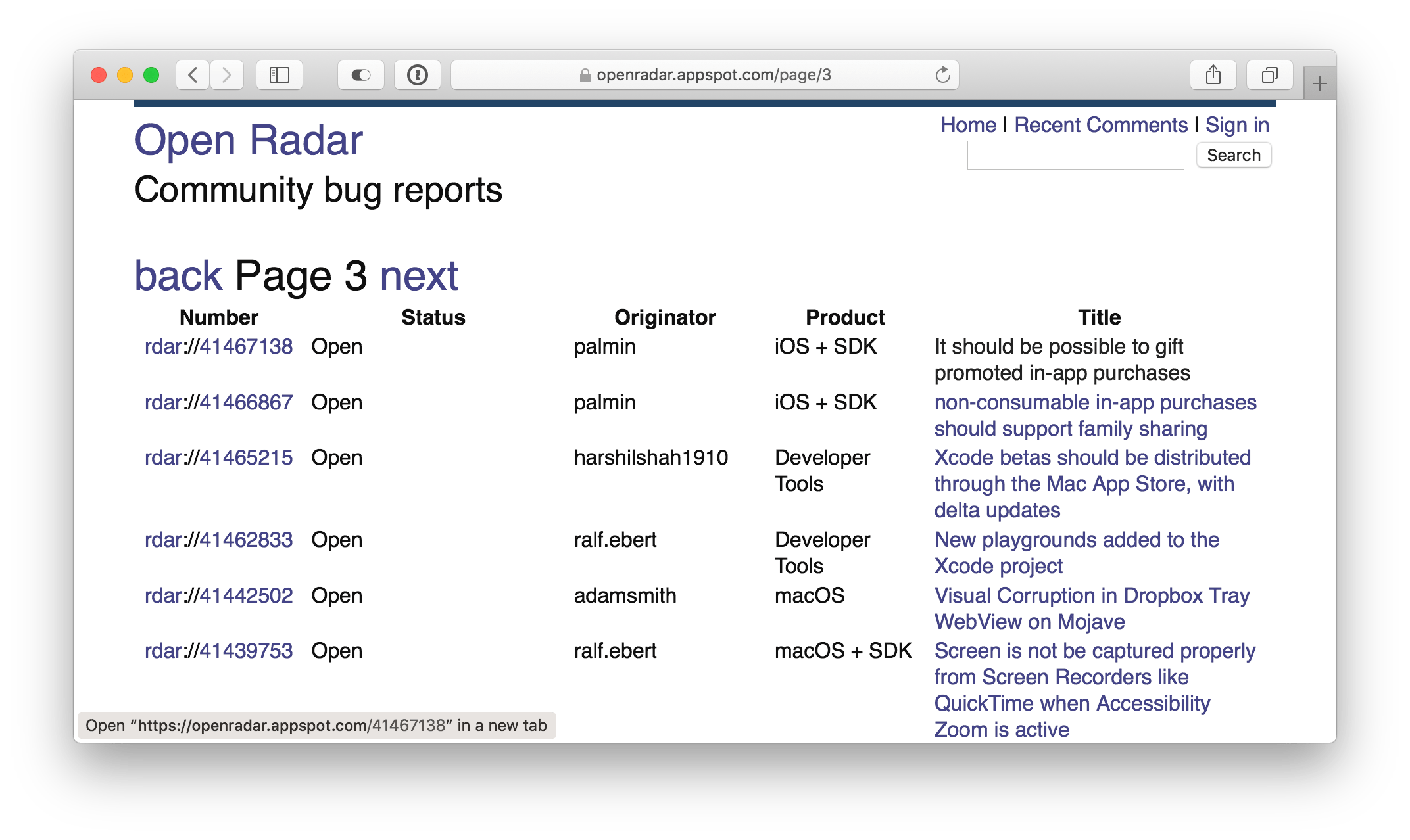 When you file a Radar with apple, you’re encouraged to also file it with Open Radar (unless it’s something that shouldn’t be disclosed publicly). Your contribution can help anyone else who might have the same problem in the future.

Although the recently-overhauled Bug Reporter web app is quite nice to use, there’s no replacement for a native app.

Brisk, created by Keith Smiley, is a macOS app for filing Radars through Apple’s Bug Reporter. It’s a fully-featured app, with support for two-factor authentication, saving radars as drafts, automatically duping radars by ID, and even opening rdar:// URLs. But its killer feature is the ability to cross-post bug reports to Open Radar.

To get started, download the latest release from GitHub or install via Homebrew with the following command:

One Problem, One Bug Report

You won’t be doing anyone any favors by reporting multiple bugs in the same report. Each additional concern you raise makes it both more difficult to understand and less actionable for the assigned engineer.

Instead, file multiple Radars and reference any related problems by ID in your summary.

Before an issue can start to be resolved by an engineer, it needs to find its way to them. The best way to ensure things get to the right person is to surface the most important information in the title.

Chances are, you’re not at your cheeriest when you’re writing a bug report.

It’s unacceptable that this doesn’t work as expected. You wasted hours trying to debug this problem. Apple doesn’t care about software quality anymore.

That sucks. We get it.

However, none of that is going to solve your problem any faster. If anything, hostility will make an engineer less likely to address your concern.

Remember that there’s a person on the other end of your bug report. Practice empathy.

Peter Steinberger has more great advice on the subject in this blog post.

How to Signal Boost Bug Reports

External developers may often liken the experience of filing a Radar to sending a message into a black hole. With thousands of new Radars coming in every hour, the odds of the right person seeing your bug report in a timely manner seem impossibly small.

Fortunately, there are a few things you can do to help your chances:

In Apple’s bug triage workflow, each problem is (ideally) tracked by a single Radar. If multiple Radars seem to report the same underlying problem, the oldest or most specific one is kept around while the others are closed as duplicates. This resolution can be frustrating for external developers, as this is often the last word they hear about a problem they’re having — particularly if the original Radar isn’t visible to them.

That said, having your bug closed as a duplicate isn’t always a bad thing. You can knowingly file a duplicate of an existing Radar as a way to say “I have this problem, too” and “Please fix this first”. However annoying this might be for the Apple engineer responsible for triage, part of me can’t help projecting a courage to those doomed bug reports, who courageously sacrifice themselves in the name of software quality. Semper fidelis, buggos.

Some teams within Apple are quite responsive to feedback on Twitter. It’s hard to stay in-the-loop when you’re in The Loop, so engineers and higher-ups alike often tune in to channel the vox populi.

Due to the chilling nature of Apple’s social media policies, you’re unlikely ever to hear anything back. But rest assured that your Tweets are showing up on a saved Twitter search somewhere in Cupertino.

Apple engineers are developers like you or me, and many of them pay attention to what we’re writing about. In addition to being helpful to fellow developers, a simple write-up may be just the thing that convinces that one engineer to take another look.

Speaking from my personal experience working at Apple, Radar is far and away the best bug tracking systems I’ve ever used. So it can be frustrating to be back on the outside looking in, knowing full well what we’re missing out on as external developers.

In contrast to open source software, which empowers anyone to fix whatever bugs they might encounter, the majority of Apple software is proprietary; there’s often very little that we can do. Our only option is to file a bug report and hope for the best.

Fortunately, things have gotten better. The new Bug Reporter site is excellent, and the process itself appears to be moving towards greater transparency:

Encouraging change on @apple’s bug reporter… I’ve been hearing of people now getting notified when an original is “awaiting verification”, and not just “closed”” Dave DeLong (@davedelong) via Twitter

The only way things continue to improve is if we communicate.

So the next time you find something amiss, remember: “file a radar”.