Beneath the smooth glass of each iPhone an array of sensors sits nestled on the logic board, sending a steady stream of data to a motion coprocessor.

The Core Motion framework makes it surprisingly easy to harness these sensors, opening the door to user interactions above and beyond the tapping and swiping we do every day.

Core Motion lets you observe and respond to changes in the position and orientation of an iOS or watchOS device. Thanks to their dedicated motion coprocessor, iPhones, iPads, and Apple Watches can continuously read and process inputs from built-in sensors without taxing the CPU or draining the battery.

Accelerometer and gyroscope data is projected into a 3D coordinate space, with the center of the device at the origin. 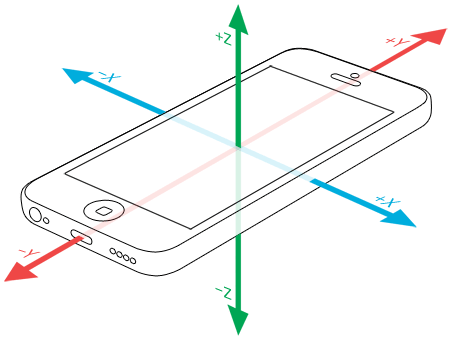 For an iPhone held in portrait orientation:

The CMMotionManager class is responsible for providing data about the motion of the current device. To keep performance at the highest level, create and use a single shared CMMotionManager instance throughout your app.

In addition to these individual readings, CMMotionManager also provides a unified “device motion” interface, which uses sensor fusion algorithms to combine readings from each of these sensors into a unified view of the device in space.

Although most Apple devices these days come with a standard set of sensors, it’s still a good idea to check for the capabilities of the current device before attempting to read motion data.

The following examples involve the accelerometer, but you could replace the word “accelerometer” for the type of motion data that you’re interested in (such as “gyro”, “magnetometer”, or “deviceMotion”):

To “pull” motion data, you access the current reading from using one of the read-only properties of CMMotionManager.

To receive “pushed” data, you start the collection of your desired data with a closure that receives updates at a specified interval.

After this call, manager.accelerometerData is accessible at any time with the device’s current accelerometer data.

You can also check whether motion data is available by reading the corresponding “is active” property.

The passed closure is called at the frequency provided by the update interval. (Actually, Core Motion enforces a minimum and maximum frequency, so specifying a value outside of that range causes that value to be normalized; you can determine the effective interval rate of the current device by checking the timestamps of motion events over time.)

Let’s say we want to give the splash page of our app a fun effect, such that the background image remains level no matter how the phone is tilted.

First, we check to make sure our device makes accelerometer data available. Next we specify a high update frequency. And then finally, we begin updates to a closure that will rotate a UIImageView property:

Each CMAccelerometerData object includes an x, y, and z value — each of these shows the amount of acceleration in G-forces (where 1G = the force of gravity on Earth) for that axis. If your device were stationary and standing straight up in portrait orientation, it would have acceleration (0, -1, 0); laying flat on its back on the table, it would be (0, 0, -1); tilted forty-five degrees to the right, it would be something like (0.707, -0.707, 0) (dat √2 tho).

We calculate the rotation with the two-argument arctangent function (atan2) using the x and y components from the accelerometer data. We then initialize a CGAffineTransform using that calculate rotation. Our image should stay right-side-up, no matter how the phone is turned — here, it is in a hypothetical app for the National Air & Space Museum (my favorite museum as a kid):

The results are not terribly satisfactory — the image movement is jittery, and moving the device in space affects the accelerometer as much as or even more than rotating. These issues could be mitigated by sampling multiple readings and averaging them together, but instead let’s look at what happens when we involve the gyroscope.

Rather than use the raw gyroscope data that we would get by calling the startGyroUpdates... method, let’s get composited gyroscope and accelerometer data by requesting the unified “device motion” data. Using the gyroscope, Core Motion separates user movement from gravitational acceleration and presents each as its own property of the CMDeviceMotion object. The code is very similar to our first example:

We can also use the other, non-gravity portion of this composited gyro / acceleration data to add new methods of interaction. In this case, let’s use the userAcceleration property of CMDeviceMotion to navigate backward whenever the user taps the left side of the device against their hand.

Remember that the X-axis runs laterally through the device in our hand, with negative values to the left. If we sense a user acceleration to the left of more than 2.5 Gs, that’s our cue to pop the view controller from the stack. The implementation is only a couple lines different from our previous example:

Tapping the device in a detail view immediately takes us back to the list of exhibits:

Better acceleration data isn’t the only thing we gain by including gyroscope data: we now also know the device’s true orientation in space. This data is accessed via the attitude property of a CMDeviceMotion object and encapsulated in a CMAttitude object. CMAttitude contains three different representations of the device’s orientation:

Each of these is in relation to a given reference frame.

Finding a Frame of Reference

You can think of a reference frame as the resting orientation of the device from which an attitude is calculated. All four possible reference frames describe the device laying flat on a table, with increasing specificity about the direction it’s pointing.

For our purposes, the default “arbitrary” reference frame will be fine (you’ll see why in a moment).

Of the three attitude representations, Euler angles are the most readily understood, as they simply describe rotation around each of the axes we’ve already been working with.

Each of these values follows what’s called the “right hand rule”: make a cupped hand with your thumb pointing up and point your thumb in the direction of any of the three axes. Turns that move toward your fingertips are positive, turns away are negative.

Keep It To Yourself

Lastly, let’s try using the device’s attitude to enable a new interaction for a flash-card app designed to be used by two study buddies. Instead of manually switching between the prompt and the answer, we’ll automatically flip the view as the device turns around, so the quizzer sees the answer while the person being quizzed sees only the prompt.

Figuring out this switch from the reference frame would be tricky. To know which angles to monitor, we would somehow need to account for the starting orientation of the device and then determine which direction the device is pointing. Instead, we can save a CMAttitude instance and use it as the “zero point” for an adjusted set of Euler angles, calling the multiply(byInverseOf:) method to translate all future attitude updates.

When the quizzer taps the button to begin the quiz, we first configure the interaction (note the “pull” of the deviceMotion for initialAttitude):

Then, in our now familiar call to startDeviceMotionUpdates, we calculate the magnitude of the vector described by the three Euler angles and use that as a trigger to show or hide the prompt view:

Having implemented all that, let’s take a look at the interaction. As the device rotates, the display automatically switches views and the quizee never sees the answer:

I skimmed over the quaternion and rotation matrix components of CMAttitude earlier, but they are not without intrigue. The quaternion, in particular, has an interesting history, and will bake your noodle if you think about it long enough.

To keep the code examples readable, we’ve been sending all of our motion updates to the main queue. A better approach would be to schedule these updates on their own queue and dispatch back to main to update the UI.

Remember that not all interactions made possible by Core Motion are good ones. Navigation through motion can be fun, but it can also be hard to discover, easy to accidentally trigger, and may not be accessible to all users. Similar to purposeless animations, overuse of fancy gestures can make it harder to focus on the task at hand.

Prudent developers will skip over gimmicks that distract and find ways to use device motion that enrich apps and delight users.